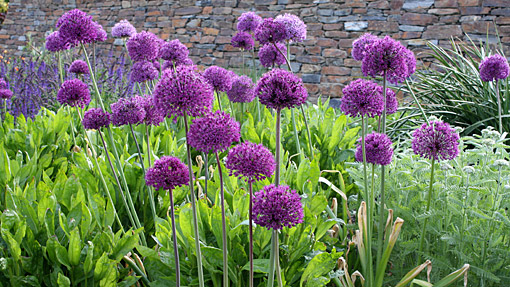 Onions are alliums, chives are alliums and leeks are alliums. Alliums are among the oldest cultivated plants in the world, adding much to nearly every global cuisine.

Ornamental alliums however, are relatively new to the landscape, being developed in Holland around the middle of the 19th century. Many new varieties have been introduced in the last decade, and oh, what a wonder they are! 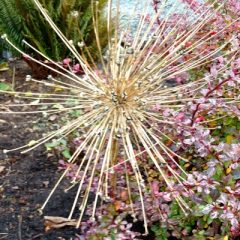 Ranging in size from ping pong ball to larger than a basketball, globe-shaped, allium flowers add sophistication, architectural interest and colour for months, rising elegantly on leafless stems above strappy foliage. They bridge the gap between the spring blooming stars of the early garden and summer flowers, and after their bloom is spent, alliums offer even more with their outstanding seed heads. Writing this article in October, I still have stunning orbs of Schubertii seed heads in my front garden that literally stop passers by in their tracks.

While popular with butterflies and other pollinators, they are avoided by deer and rabbits presumably to avoid onion breath! I have had the pre-bloom foliage sampled occasionally but the flowers are never touched. They thrive in full sun in average, very well drained soil; like other bulbs they resent soggy ground. With these minimal requirements met, alliums will bloom reliably for years.

Alliums play well with others, in fact they are best planted with leafy perennials in front to cover their foliage, which does tend to look less than stellar by the time the blooms emerge. The tall, stately orbs show well in the mid to back of the border.

The famed landscape designer Piet Oudolf favours alliums in his meadow-like landscapes, pairing them with undisciplined perennials and grasses, but they are equally at home in a formal design with more architectural plantings. While alliums in general have similarities, several unique characteristics are described below.

Allium azureum, one of the true blue flowers in horticulture, stands out from its peers by the clear blue orbs atop the 80 cm stems. Delightful sprinkled through a rose garden, with penstemon, hardy geraniums, or yellow daisies.

Bulgaricum has a slightly different flower style, with creamy bell-shaped pendant buds that dangle from stem top as it approaches the 30-60 cm height.  This is a very elegant plant alongside wider leaved plants such as sun-tolerant blue hostas, Calla lilies, Alchemilla mollis.

Aptly named, Allium ‘Chameleon’ does change colour as the flower matures. Starting off dark rose to pink, then white with stripes, it is loved by bees as are all alliums. Only 35cm tall, this is one to grow in a drift near the front of border, perhaps with small conifers or broad leafed perennials. 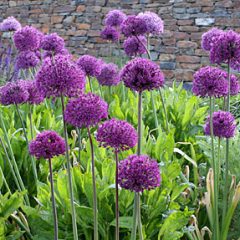 Christophii, or Star of Persia, grows to only 50cm tall, but the umbels are a massive 20cm, followed by attractive seed heads. Each umbel consists of up to 100 star-shaped pinkish flowers with a metallic sheen. Due to the size of the full umbel, plant only 1 bulb per square foot, and allow it to stand out by planting with fine grasses. This variety has received the coveted Award of Garden Merit from the RHS.

‘Fireworks’ really does look like an explosion of colour. Only 20cm tall, full of spring freshness which will blend well with late season tulips in similar hues, or use as a vibrant splash among Heucheras and other foliage plants.

‘Graceful Beauty’ with 3” starry white flowers looks beautiful planted in drifts through the garden. Peonies, Lambs’ Ears, and grasses are lovely companions. This is an American native, cultivated since 1857. 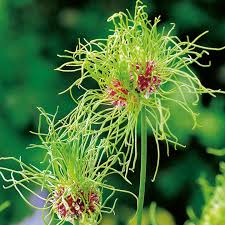 Hair allium does look like it’s having a bad hair day, in a delightfully charming way, of course. Big on attitude, this little beauty is a whimsical conversation piece to be sure, and stands out with poppies, irises, penstemon and lilies.

‘Purple Sensation’ being slightly larger, looks full at 9 bulbs per square foot, planted in drifts. It is the earliest allium to flower. Outstanding combined with silver foliage, pale variegated leaves, Lupins, Euphorbia, and Alchemilla mollis. Favoured by flower arrangers for its long-lasting blooms.

Allium ‘Schubertii’ is a massive umbel (30cm) that looks like a botanical explosion. It dies back gracefully to leave behind a long-lasting seed head that may be more impressive than the bloom itself. Stunning in late spring with shrubs such as Berberis, conifers, and columnar flowers such as Salvia and Foxglove. Another RHS Award of Garden Merit plant, this one’s exceptional.

Alliums bring colour, style, and architectural artistry to the garden. They enhance other plants and bridge the gap between late spring and early summer bloom. They are reliable, deer resistant, and easy to grow, so what’s not to love? Do try them, you won’t be disappointed. 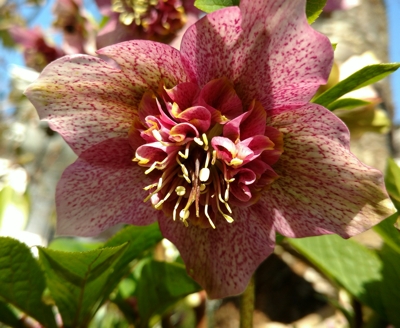 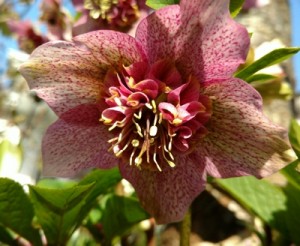 It’s hard to resist the siren call of hellebores.  Winter blooming, in a wide variety of colour and form, they are long lived and don’t even need dividing. All that and they are both drought tolerant and deer resistant! No wonder we love them.  They are the most collectible of plants.

Helleborus niger aka Christmas Rose and H. orientalis aka Lenten Rose are the species we are most familiar with.  Hellebores seed themselves freely and are notoriously variable.  That variability has long fascinated plant breeders, who had to grow their different coloured plants miles apart from each other in order to have some control over pollination.  Growing hellebores was always a bit like hosting a pot luck dinner, they never knew what they were going to get.

The real challenge though, comes in duplicating hellebores.   It’s only relatively recently, thanks to new techniques like tissue culture, that hellebores have been readily available commercially.  Hellebore varieties are still often sold as ‘seed strains’, meaning that one will be similar to others in the group, but rarely the same.  They have become complex hybrids, known botanically as Helleborus x hybridus. 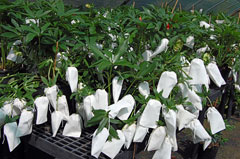 Seedpods are individually bagged and collected by colour strain.

Hellebores have come a long way from their original murky shades of pink and white, thanks to breeders like Marietta O’Byrne from Oregon’s NorthWest Garden Nursery.  Her ‘Winter Jewels Collection’ features doubles and singles, rich colours and intricate patterns which result from hand pollination and careful selection.  Even their names are irresistible – ‘Berry Swirl’, ‘Onyx Odyssey’, ‘Golden Lotus’,  ‘Apricot Blush’ to name a few; they even sound enticing.  The colour and form of each plant will be similar to others in the strain, but again, rarely identical.
Through successive generations the colours become more stable, and the strains improve.  Hellebores can be expensive, but considering the amount of work that goes into producing them and the fact that they will live for years, they can be considered an excellent investment!

How to Grow Hellebores
We think of hellebores as woodland plants, but in their native Eastern Europe they are found growing in open sunny meadows in alkaline soil.   They are very adaptable though, and will thrive in a lightly shaded acidic woodland.  Although they are drought tolerant, hellebores are at their best in moist, rich, well-drained soils.  At planting time, dig in plenty of leaf mould, garden compost or mushroom manure.   Additional feeding is not usually needed, but an occasional application of a balanced slow release fertilizer won’t hurt.  Mulch occasionally in spring with compost.

Warning: Buying hellebores can be habit forming and can lead to obsession!

Winter is the best time to prune modern repeat climbers as all the old leaves need to be picked off anyway, so may as well prune at the same time. (Once blooming old roses and ramblers are best when pruned in the summer after flowering)

The key to climbers is to train the canes as near to horizontal as possible. A good structure of horizontal branches dramatically increases the number of flowers. Climbers that are allowed to grow straight up will have flowers only on the tips of the canes. Newly planted climbers won’t need much pruning the first year or two. Just tie in any canes that have developed over the summer and cut side shoots back to about 6 inches. 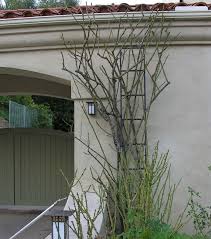 The rose in this picture would have most of its flowers at the top.

To prune an established wall trained climber, start by taking a critical look at the plant’s structure.   Identify two or three of the oldest, less productive canes for removal or cutting back. Decide which of the newly developed canes you want to keep and where they would be best tied in. Look for dead wood, weak thin growth and awkward branches.   Try to make a plan before you start cutting.

Once you have your game plan, start by cutting away what you don’t want. The oldest branches can be cut at ground level, or at a low point where you want a new branch to form. Keep an eye on where the buds are and make the cuts just above buds that are pointing in the direction you want new growth to go in.

Remove any remaining leaves, an important step in disease control.   Lastly, rake up any fallen leaves off the ground, lightly fork over the soil around the base of the plant, apply a couple of inches of compost and you’re done.

The steps for pruning a rose trained over an arbour or similar structure are pretty much the same. Try to train some of the branches in “S” curves up trellised sides or wrap them around the support posts. Be sure that the branches over the top of the structure are tied down securely to prevent wind damage and to promote good flowering. Cut back side branches to two or three buds. 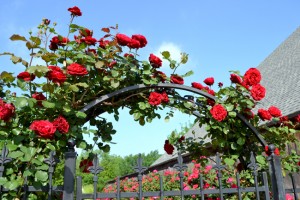 See how this Don Juan Rose is tied to the top of the arbour, producing many side branches and lots of flowers. 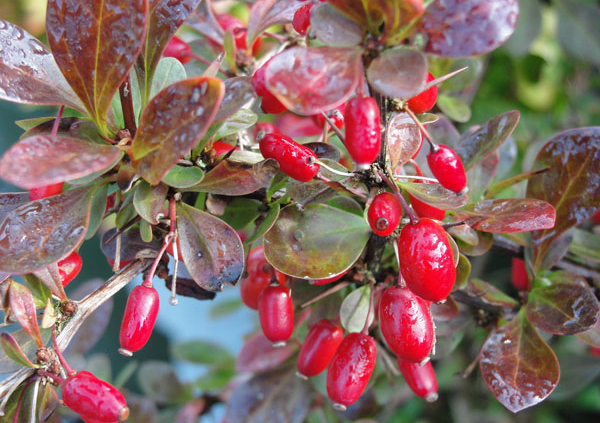 Brilliant bark, deceptively delicate flowers and the jewel tones of berries and persistent fruits that pop against winter’s muted greys and browns; there is nothing quite like a flash of bright colour on an otherwise dreary day to gladden the heart and to entice us outdoors for a closer look.  Just because its winter doesn’t mean the landscape has to be dull and boring.  A veritable kaleidoscope of colour is possible with a little planning.   Maybe there’s room for some of these beauties…