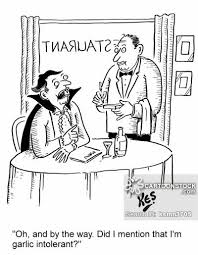 The history of garlic can almost be described as the history of human migration.  Garlic is native to Central Asia, specifically the Caucasus region between the Black and the Caspian Seas, and over many millennia it has been carried to almost all corners of the world. Garlic flavours many of the world’s cuisines. It is steeped in folk lore and legend. (Everyone knows that wearing garlic is the best way to keep vampires at bay!) Folk wisdom attributes garlic with a variety of curative properties, many of which have been proven by contemporary science. Garlic is mentioned in ancient Egyptian, Greek, Indian, and Chinese writings as well as the Bible and Koran.

Garlic was first brought to North America by immigrants from Poland, Germany and Italy, but most of the varieties we use now came into the US in 1989.  In the 1980’s the USDA tried to get permission to collect new garlics in the Caucasus region, then part of the Soviet Union, but were denied because of military installations in the area.

In 1989 the Americans were finally granted permission to enter the region, but were heavily guarded and allowed to travel only at night. They travelled along the old Silk Road and purchased garlics from local markets, often naming them for the towns and villages they were found in.   (Red Russian garlic, one of our most popular varieties, was actually brought into BC by the Dukhobors in the early 1900’s and is now considered to be a BC heritage variety.)

Garlic, or Allium sativum, comes in two basic types – hardneck and softneck. Hardneck varieties (var. ophioscorodon) usually grow a woody flower stalk or scape out of the centre of the bulb.  They do best in cold, damp climates.  Typically a bulb develops four to ten large cloves. Flavours are strong and often spicy and complex.  Most hardneck garlic does not store well and is best used fresh. Hardneck varieties come in three different types: Rocamboles, which have thin parchment-like skins, and are easy to peel, Porcelains which have thick tough skin and do store well, and Purple Striped, named for their distinctive colouring.

Softneck garlic (var, sativum) evolved from hard-neck varieties and grows best in warmer climates.  Bulbs keep well and typically contain multiple cloves.  They don’t produce flower stalks unless they are stressed.  Softneck varieties come in two different types: Silverskin and Artichoke.  Silverskins have soft pliable necks that lend themselves to braiding, lots of small cloves and spicy flavours.  Artichoke garlic has larger but fewer cloves and a milder flavour.  Most of the commercially grown garlics found in the grocery store are soft neck varieties.

Choose an open, sunny site with light, well-drained soil.  Incorporate lots of organic matter, such as well rotted manure or good compost into the soil.  Garlic won’t thrive in acid soils (below 5.5pH) so be sure to apply lime if your soil is acidic.

Plant garlic in October so it can develop good roots before the winter.

Break up the bulb carefully into individual segments prior to planting. Try to leave the skins intact.

Make sure that the cloves are planted the right way up: the flatter basal plate should be facing downwards

Allow about 4” between individual cloves and 1 foot between rows. Plant the cloves so the tips are one inch below the soil surface.

If your soil is heavy and wet you could start your garlic off in small pots, or divided trays in the fall, overwinter them in a cold frame and plant them out in the spring.

Over the growing season hand weed regularly.  Hoeing can be tricky as the bulbs are so close to the surface.   Mulching, with shredded leaves or straw, will help with weed suppression.

Hardneck garlic cultivars readily produce flower stalks which should be cut off as soon as they appear. They are delicious in stir fries! 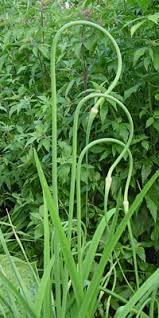 Garlic matures between the end of July and early August. Stop watering a few weeks before harvesting to allow the bulbs to cure. Harvest when 1/2-3/4 of the leaves have turned yellow (depending on variety). Don’t delay as the bulbs open up and won’t store as well if lifted late.

Lift the bulbs with a fork. Handle gently as bruising also reduces their storage potential.

Dry the bulbs thoroughly, spread out in a single layer in the sun or in a dry, well-ventilated shed or similar environment.  Drying will take two to four weeks depending on the weather. When the foliage is dry cut off the stalks and store the bulbs in a cool dry place.  Do not store in the refrigerator. This will induce sprouting, changing the garlic’s texture and flavour.

It’s interesting how idle thoughts, in this case, “I wonder why the names of garlic cultivars are so exotic”, can lead to a voyage of discovery. The story of garlic is fascinating, and I’ve barely scratched the surface here.  If you’d like to learn more, these websites are particularly informative:

Copy this URL to look at an in-depth report on garlic growing in BC put out by the Ministry of Agriculture: 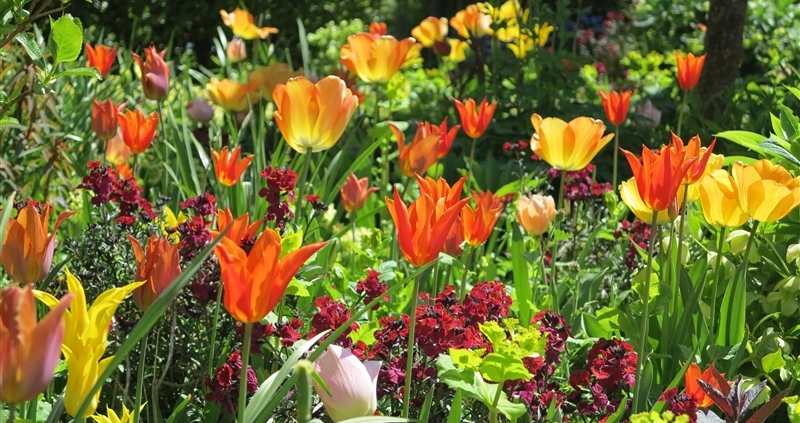 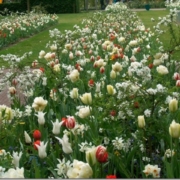 When I first saw photos of Dutch garden designer Jacqueline van der Kloet bulb gardens, I was struck not only by how beautiful they were, but also by how well they would work in our relaxed West Coast gardens. She leans towards soft colours punctuated with splashes of bright ones and plants in a loose natural style.  Her work can be seen in public gardens all over the world, but the same principles can be used to create beautiful displays in gardens of all sizes.

Traditional bulb plantings are based on contrasting blocks of bold colour.  Jacqueline picks a colour scheme, selects the bulbs and mixes them all together in the wheelbarrow.  In traditional plantings, the bulbs are spaced with geometric precision, but she literally throws them on the beds and plants them more or less where they land. The results are reminiscent of Impressionist paintings. 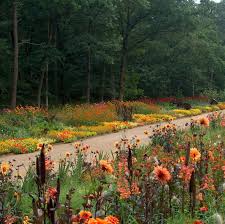 The majority of course, are spring blooming but summer bloomers can be added to the mix to provide a long season of colour.   Spring bulbs could be followed by alliums, lilies, gladiolus and dahlias.

Most of us add bulbs to mixed borders as an after-thought, tucked in here and there, but Jacqueline starts with bulbs and adds complementary perennials, grasses and shrubs to add structure, round out the beds and hide the old foliage as it dies down.  While starting from scratch isn’t likely to be an option in most gardens, reworking empty spaces might be.  When bulbs are planted in isolation, there is always the issue of what to plant when they die down and what to do with all that messy foliage. 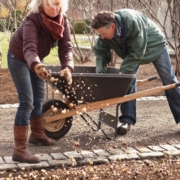 When planning plantings of mixed bulbs, the trick is to keep it simple – limit the number of varieties to three or four in a small area, add a few more in a larger one.   Small bulbs should out number larger ones and there should be enough to make a good show.   Mix the bulbs together, toss them on the bed and plant them where they lie.  Some will be planted more closely together and others further apart.

The best choices are bulbs that will come back year after year.  Leaving the foliage to die down naturally will encourage them to come back in greater numbers.  Ideally beds with bulbs should be kept on the dry side in the summer so they don’t rot. 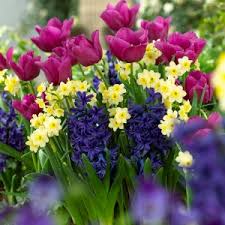 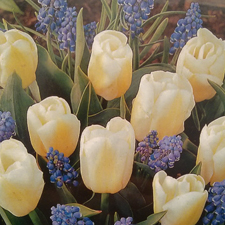 It will be interesting to experiment with this new way of planting bulbs, there are so many to choose from.   Take the guesswork out of the process by trying some of the prepackaged assortments.  They are designed to produce either a prolonged display or one big show. Your choice!

Most of the vegetables suitable for the winter garden are perfectly hardy, but minor protective measures will ensure a greater harvest, better quality leaves, and cleaner produce.  I’ve grown kale, leeks, chard and purple sprouting broccoli in a raised bed with no protection over the winter other than leaves covering the soil.

The soil needs more protection than the plants, ironically.  If we have a mild, wet winter, constant rain will leech nutrients away, compact the soil, and enable weeds to take hold.  If we have a cold winter with freezing and thawing, the soil needs an insulating buffer, because if it freezes, water can’t be absorbed by the plants, and the freeze/thaw cycle causes heaving of the soil with subsequent damage to the fine root hairs. 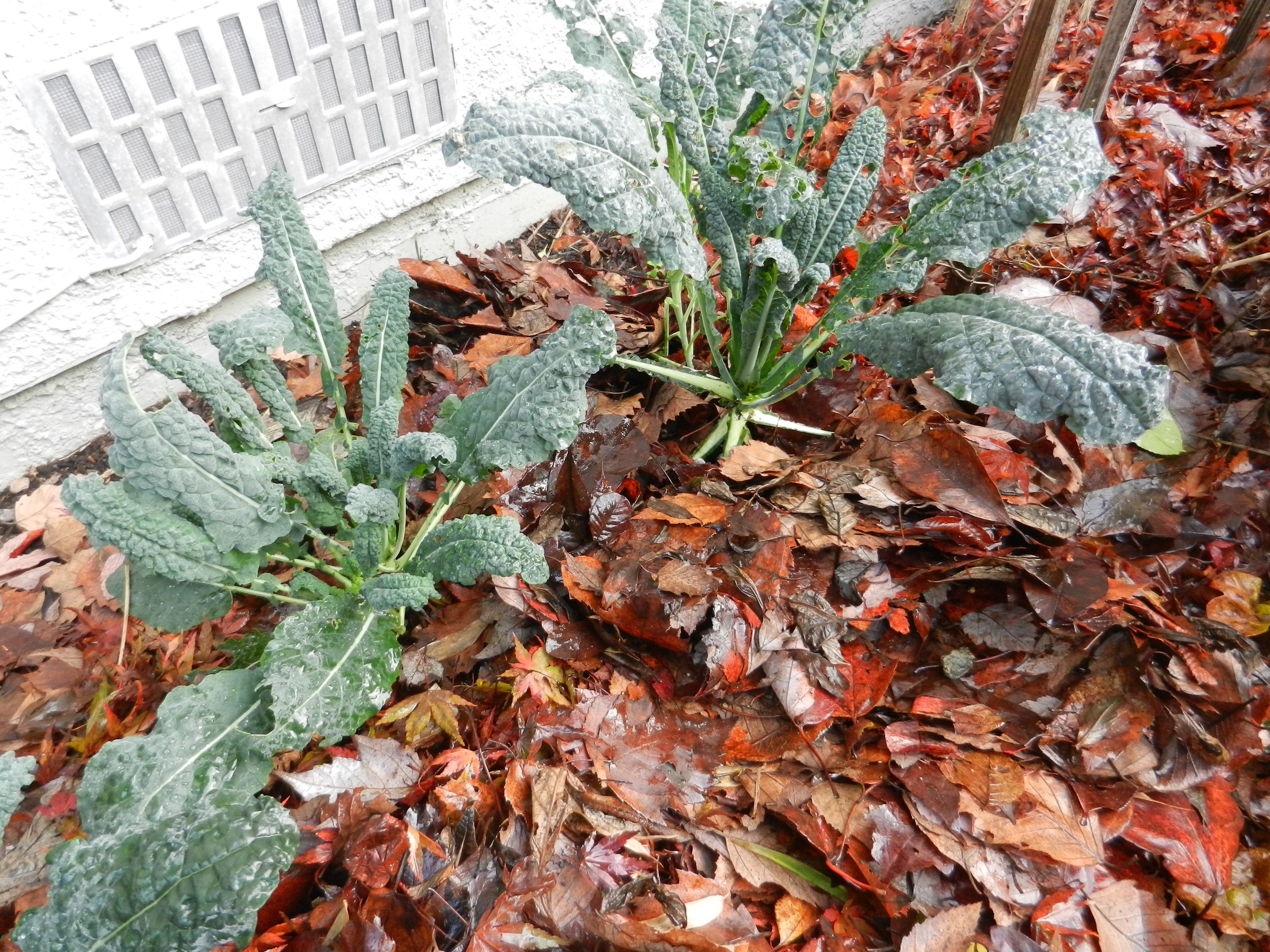 The best soil mulch is a 4-6” layer of autumn leaves, which insulates, protects and feeds the soil as it’s broken down first by worms, and later by microbes.  The breaking down process takes place faster if the leaves are chopped up first, but even if left whole, they will work.  In really cold weather, a further mulch of fluffy conifer branches or larger leaves may be used to cover the plants entirely. The shoulders of root veggies will benefit from a covering when the temperature plummets.

Covering with a plastic sheet is very effective in cold and rain; it raises the temperature while also protecting from drying winds. A covering such as this needn’t be attached to a frame, it can just be draped over the bed and held down with rocks.  Some people make a support with pipe hoops, or a tunnel of wire mesh which keeps the plastic from weighing down the plants if rain or snow accumulates on top.   On warmer days, you can leave the plastic sheet on to trap the warmth, or remove it for ventilation.

What about a greenhouse? This of course is the ultimate protection, and crops grown in an unheated greenhouse will have unblemished leaves, no slug damage, and the warmth of sunny days brings on spurts of growth unseen outside. Just remember to water occasionally, and in a very cold snap, a blanket or tarp will keep the plants warmer.  On sunny days you may have to open the doors to moderate the wide swings of temperature from day to night, and to provide ventilation.

What about slugs? Slugs don’t go south for winter, but continue to share our harvests, unfortunately. Safers Slug bait is safe for pets and other animals, and is worth using sparingly all season long in a mild winter.

Climbing cutworms can do serious damage in the early spring; their presence looks like slug attacks, but there will be no slime trail. They come out at night to eat, so either go out with a flashlight, or check for the characteristic C-shaped, ugly-looking caterpillar curled up in the leaf litter. Their pupae look like mahogany bullets, something to eliminate whenever you see them.

So enjoy your winter garden, and with these few precautions your harvest will be bountiful and rich.

At the risk of sounding like a broken record, I will remind you all of Linda Gilkeson’s fine book Year Round Harvest: Winter Gardening on the Coast, available via her website.