Berries Are The Best 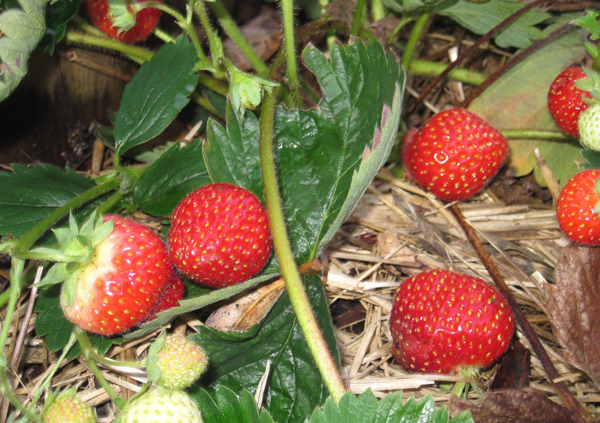 For taste and pleasure, growing delicious ripe berries in your own backyard has to be the ultimate treat.   The Big Three of Berry Heaven would be strawberries, raspberries, and blueberries. There are many others of course, and aficionados of gooseberries will likely argue with my assessment, but who can argue with a juicy, red strawberry?   Read on For Practical Advice on How to Grow Berries

STRAWBERRIES are super easy to cultivate in the home garden.

There are two main categories, ever-bearing and June-bearing:

Everbearing produce an intermittent crop of berries from late June right through to October. Tristar is the most popular of this type, and is a vigorous and disease-resistant plant with large, tasty fruit.  Totem produces its crop in June, and then it’s done for the year, but the yield is large. June-bearing plants produce more runners, so space accordingly.

Strawberries prefer acid soil, so don’t lime this part of your garden. They also appreciate a mulch of straw once the soil warms up, which keeps the berries clean and relatively slug free. Growing in containers is a great plan because the berries can hang down, ready for easy picking.

Botrytis, that nasty mold that ruins crowded berries, can be avoided by spacing well, removing excess runners (leave 2 or 3 per plant and allow them to root before cutting from parent plant), and giving good air circulation. Keep the crowns above soil level, and clean up the foliage in the fall. Don’t water late in the day.   Pests? Slugs and birds will be your main competitors, foiled by Safers slug bait and netting.

RASPBERRIES take a lot of room, but are deserving of a special place. Of my three raised beds, one is devoted solely to raspberries, and I’ve never regretted this lavish use of space. They need strong supports, and a permanent structure of strong wires strung between solid posts is well worth the initial investment of time and money. 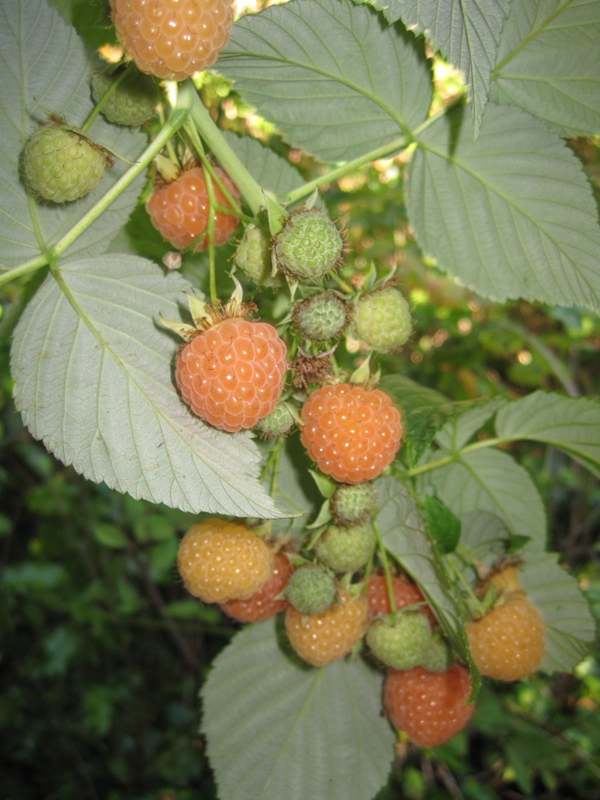 Everbearing, such as Fall Gold and Heritage, will have two crops a year if you are careful with pruning.  Cut the fruiting canes down only half way when dormant, and these canes will reward you with an early crop, new shoots emerging in April along the half cane remaining from last year. I already have raspberries forming on my Fall Gold on last year’s canes. Once these two-year old canes have fruited, they can be cut to the ground. Allow only 5-10 new canes to develop from each plant; they will produce berries on the top third of the cane, from September onwards. I’ve had them produce right up to December.

Summer-bearing, such as Tulameen will produce a heavy single crop that goes on for several weeks in the summer. Fruiting canes should be cut back to the ground when plants are dormant; be careful not to cut down any of the new canes, which will fruit next year. At this point, tie up the new canes before the winter winds lash them around, and when spring comes, your raspberries will be ready for the crowds of bumble bees that love to pollinate them for you.  Just like climbing roses, horizontal branches of cane fruits produce more bloom and hence more fruit, so keep them trained along the wires as close to horizontal as possible. 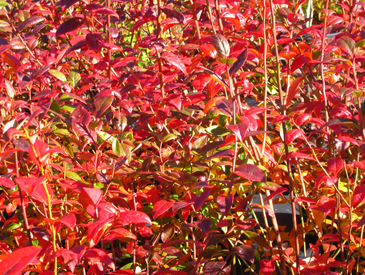 BLUEBERRIES are as beautiful as they are delicious. The fall colour on a blueberry bush is rich in reds, gold and orange, and the red twigs in winter light up a dark day. As an attractive shrub, they can be grown in containers if re-potted every 2-3 years

While blueberries are actually self-fertile, they will crop better with at least 2 different varieties grown together for cross-pollination.  Some of the well-known varieties are Bluecrop, Duke, Patriot, Northsky (a half-high hybrid), and Chandler.

Pruning is simple; remove any dead, diseased or crossing branches when the plant is dormant, and open up the top structure to let the sun shine in. In late winter the fruiting buds are easy to spot, they are the fatter buds; consider this when wondering what to remove. When the plant is much older, start removing one or two of the oldest branches to the ground yearly to allow for new growth.

Just add sunshine and protect from hungry birds! Remember that they aren’t necessarily ripe when they first turn blue; let them darken further and enjoy the added sweetness of a fully ripe blueberry.

But why stop with the Big Three? The variety of berries is bountiful, and right now is the time to try something new. Consider the following, to expand your eating and growing pleasure:

Also called Haskap, this mighty little morsel has very high levels of Vit. C and anti-oxidants. Very hardy and easy to grow, it ripens early and has a complex flavour reminiscent of grapes, raspberries and black currants. Needs cross-pollination, so plant more than one variety. Allow them to fully ripen; about a week after skin turns blue the flesh will also change from green to purple. Several of ours have fruit already!

KIWI This one needs both a male and female to pollinate properly. Even the Issai, which is billed as being self-fertile, will fruit more productively if there are two plants near each other.  It’s easy to grow in a sunny warm area of the garden in moderately fertile soil rich in compost. Avoid over-feeding with nitrogen and give support to this climbing vine.

THORNLESS BLACKBERRY Ok, it’s a Canadian tradition to pick blackberries by the side of the road, but imagine having your own crop and no thorns! The Chester variety is very hardy and productive. Likes lots of sun in a rich moist soil amended with compost.

LOGANBERRY & TAYBERRY  Both are crosses between raspberry and blackberry, with the delicious taste of each. Very sturdy and disease resistant. Logans are thornless. Tays have small prickles along branches.  Prune and support as for raspberries.

CRANBERRY No bog needed, in fact THEY DO NOT LIKE SATURATED CONDITIONS. Water as you would other garden plants, dig in damp peat for high acidity.  They are rhizomatous plants, ie they send out runners to expand the plant. Give them room to spread, plant in a bed that you can designate for them.  Harvest berries when red, don’t allow them to stay on the plant if frost is forecast.  Very high in Vit C and antioxidants!

GOJI BERRY Full of nutrients, a little raisin-sized gem for good health, as it contains more carotene than carrots, all the essential amino acids, and many minerals. Gojis have a slight sweet and sour taste, and ripen from August to October. Full to half day sun, well-drained soil, drought tolerant once established.

FIG ‘Desert King’ Best variety for our climate, can grow in a container, espaliered, or as a yard tree in the fullest sun you have. Yummy green figs in late summer, be sure to let them ripen fully. They should be getting soft, looking almost over-done, before eating. Likes alkaline soil; be generous with lime.

JOSTA BERRY Cross between Black Currant and Gooseberry, these tasty, small berries are rich in Vit C; they are self-pollinating, disease resistant, and tolerate a wide range of soil conditions.

GOOSEBERRY   This deer resistant rounded deciduous shrub is self fertile, mildew resistant, and thrives in containers if kept moist. Gooseberries do well in full to half-day sun, compost-rich soil, producing lots of sweet fruit with a crisp skin and snappy tang.

SUMMER IS COMING SO BE FRUITFUL, AND GROW BERRIES!